Image Wisely, a joint initiative of ACR, RSNA, ASRT and AAPM,
provides information to the medical community to promote safety in medical imaging.

The automatic exposure control circuit in fluoroscopy units adjusts the intensity of the incident X-ray beam to achieve a predetermined set point which is typically 0.020-0.040 microGray for each fluoroscopic image and 1-4 microGray for each digital subtraction angiography (DSA) image. The intensity of the incident X-ray beam can be estimated from the reference point air kerma (Kar). The general relationship between the number of incident photons entering the patient’s skin and exiting photons reaching the detector is described by the Beer-Lambert Law.

Where ε is the absorbance coefficient, c is the concentration of the absorbing substances and l is the path length through tissue. ε is the high for highly attenuating substances such as iodine, barium and metals. ε is the low for air and intermediate for fat and water.

In most tissues, the concentration of the absorbing substances is fixed but the concentration factor becomes important when administering contrast materials. A bladder filled with either a small amount of concentrated contrast material or a large amount of dilute contrast can markedly attenuate the beam. Large metallic objects such as spinal rods can also markedly attenuate the beam. Such attenuation can lead to 10–100 fold increases in the intensity of the incident X-ray beam in order to have sufficient photons reaching the detector.

The impact of patient thickness on X-ray penetration is dramatic. Small increases in tissue thickness cause large increases in the intensity of the incident X-ray beam. Again this is necessary to have sufficient photons reaching the detector to create useful images.

*Assumes interaction of monoenergetic photons and tissue where the thickness of the half-value layer is approximately 3 cm. Since X-rays produced by fluoroscopy units contain photons with a wide range of energies, the lower energy photons tend to be absorbed or scattered by the patient and higher energy photons are more likely to reach the detector. Indeed, since low energy photons are unlikely to reach the detector, aluminum and copper filters are used to preferentially remove them from the beam before they reach the patient. An interactive simulation that models the attenuation of a polychromatic beam is available [1].

The procedure timeline and event log reveal three separate DSA runs, each approximately 65–75 mGy. Each run was two frames per second and contained 12-15 frames. Images from the procedure and a subsequent abdominal CT scan show that patient had standard IVC anatomy and a large (36 cm) abdominal diameter. The DSA runs for the IVCgram were centered over L2. A retrievable filter was placed. 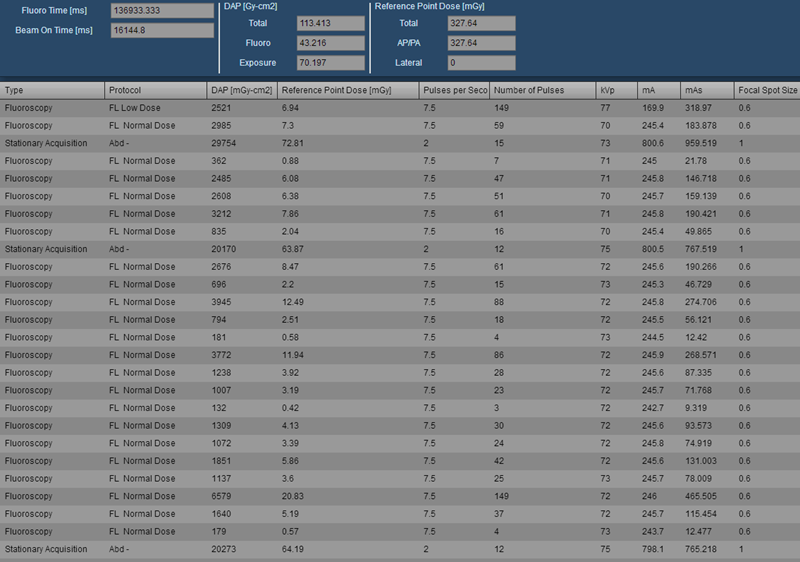 2. Contributing Factors for the Higher Than Usual Ka,r

Procedure timeline and event log reveals one DSA run of 15 frames at two frames per second. This run resulted in 7.3 mGy. Two single image acquisitions were performed near the end of the procedure. A permanent filter was placed. Images from the procedure and a subsequent abdominal CT scan show that patient had standard IVC anatomy and a small (17 cm) abdominal diameter. 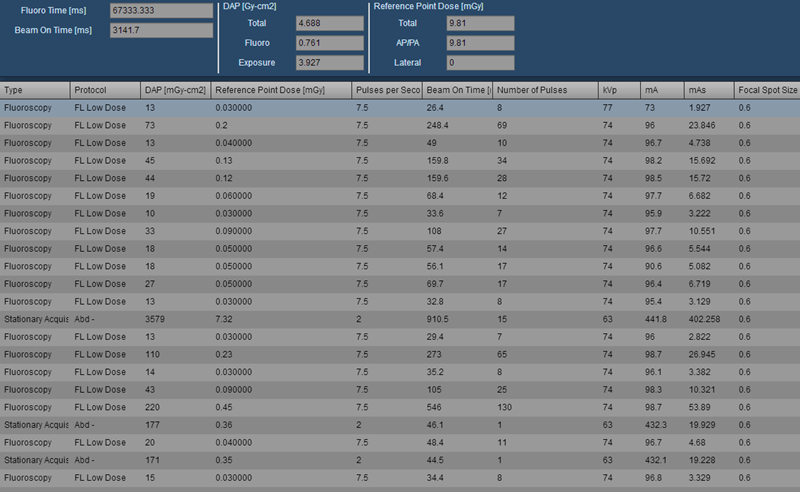 Contributing Factors to the Lower Than Usual Dose Metrics